I found this auction listing on EBAY:

It's for a Jonathan Dwyer 3/3 2010 Topps Supreme quad jersey card.
HERE'S THE PIC

FUNNY.....MY CARD IS OF THE SAME PLAYER THAT I JUST PULLED IN MY BLOG TODAY. 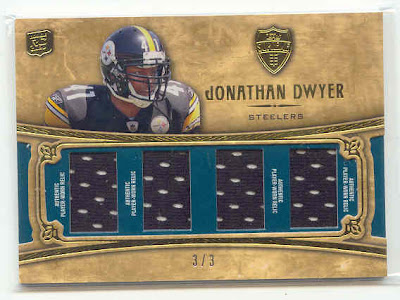 WHAT THE HELL ARE YOU TRYING TO PULL TOPPS? I know the card shows him in a different uniform but this whole numbering system sucks and is useless when you pull this kind of crap. IT EVEN HAS THE SAME STINKING JERSEY PIECES. SOME ONE HAS SOME XPLAINING TO DO TOPPS!
Posted by The Big Kahuna at 1/29/2011 04:14:00 AM 1 comment:

Well......I finally succumbed to my itch of wanting to bust open some high value stuff so I paid a visit to my local card shop to see what goodies I could find. While I was able to stock up on some singles that I needed to complete a few sets that I've been working on it seemed like the only thing he had in for football was 3 cases of Topps Supreme and a few boxes of Topps Magic. So I looked at my options and said to myself, "You know it's a risk with these hit or miss boxes". So after mauling it over for 33.7 seconds I splurged on myself for once. 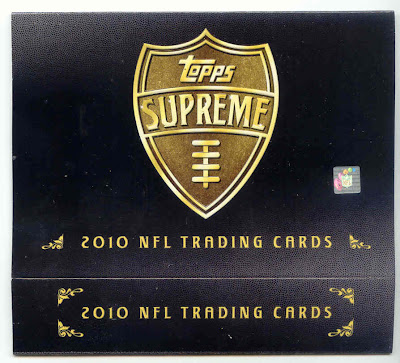 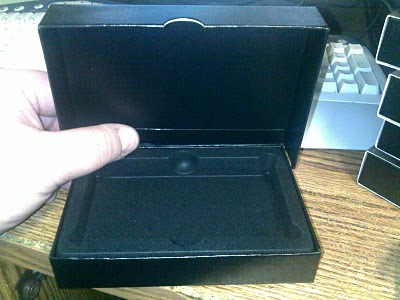 These boxes are in all black and they can be recycled as gift giving boxes or something to keep jewelry in or cards perhaps. They really are nice boxes.......FOR $85.00! Good boxes to give gift cards in to someone! 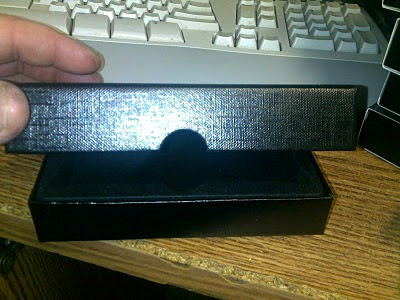 You get one 2010 Topps Supreme Football HOBBY Box which includes 1 pack per box.

Highlights of this Hobby Exclusive Premium Product is a High-End Hit in Every Pack - a Low-numbered Autograph Relic, Autograph, or Relic Card, plus 2 numbered base cards (numbered to 599, and a Parallel version numbered between 1 of 1s and up to 199. The base set has 100 cards including rookies and star veteran players.
Some of those high end relics could be one of these unique autographed relic cards:

Here's what I pulled: Well now......lookie here.....Finally I have pulled a NY Giants auto.
Eli Manning Patch card auto 38/50. It looks like around the squares where the jersey meets the cardboard there is a slight tint of damage to the red border.
Drew Brees 63/209
Ray Rice 5/5 ........looks like he's being chased by Ray Lewis for some reason.
LaDainian Tomlinson 112/209 .....who was stuffed in the playoffs like one of Gino's cheesesteak subs down a guy's throat!

ON TO PACK TWO: 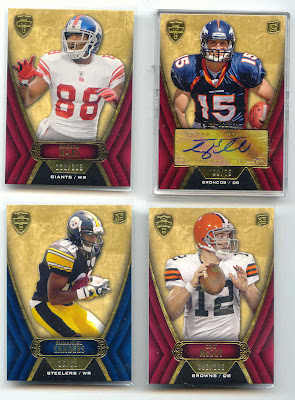 Holy Cow it's a Tim Tebow rookie autograph #9/75...blessings for us all! I thought it was on card auto at first glance but then the sticker finally reflected in the light (like Tebow's HOLY PRESENCE) and I was saddened by that but then it was okay because I felt blessed by the presence of the card and Tim's HOLY STARE. SUCH A DEMONIC STARE!!!
Hakeem Nicks 138/209
Colt McCoy rookie 82/209
Emmanuel Sanders rookie 16/62 ....Steelers suck by the way! If I hear "Stairway to seven" one more time around here then some folks are gonna have a few pitchforks stuck where the sun doesn't shine! 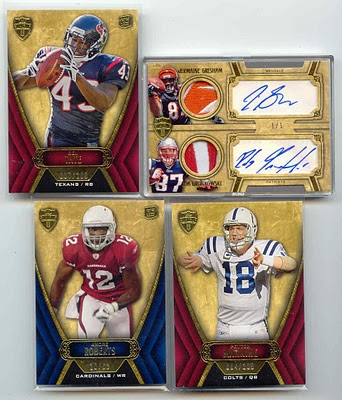 WHOA...... a 1/1 Dual Patch auto of Jermaine Gresham and Rob Gronkowski. Jermaine has part of the Reebok Logo and Rob has part of the Patriots (tail portion) logo. BTW TOPPS....good job of picking a photo shot that shows Jermaine's face being partially covered by a football.
Ben Tate rookie 7/209 .......looks like he's about to eat that ball!
Peyton Manning 94/209 .....looks like he's trying to swim
Andre Roberts rookie10/62 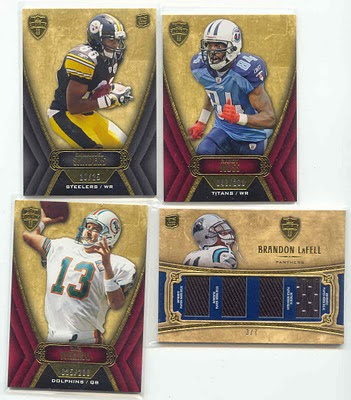 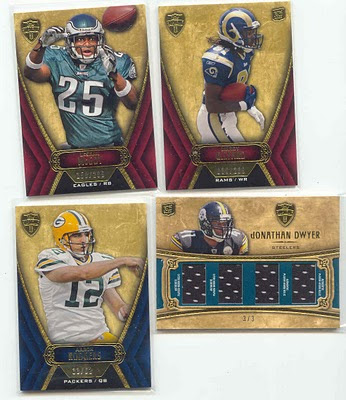 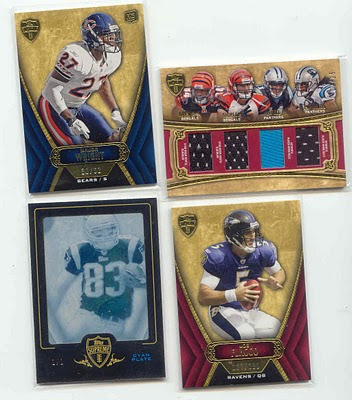 I would have to say that pulling a $10.00 jersey card out of an $85.00 box left me with a really sour taste in my mouth. It's going to be a hit or miss chance every time you open a box and I knew this going into the situation. I did pull a double of the Emmanuel Sanders rookie card even thought it was a variation..... still out of a case of 8 boxes I should not pull a double of anything in my opinion.

Sticker auto's .......These cards would've been much better with "on card" auto's.

Only a few cards had a slight chipping issue on the back of the cards. All of the cards seemed to have four sharp corners and no border issues on the fronts. However if I'm paying that much for a box of cards I better not have chipping issues!
Posted by The Big Kahuna at 1/28/2011 07:21:00 PM 1 comment:

What shall we rip open?

Alrighty....I admit I might be a pack junkie addict but at least I'm in total control of it. Well.... I was in control of my urges until I found out that I'm getting a nice tax return check courtesy of the IRS for this past year. So after paying off some bills and taking care of the "future Mrs. Kahuna", I have a little extra fundage to monkey around with and I have decided to let the inner beast come out (no..not that one Kathy ;-) my Fiance reads my blogs too ya know- Gotta make it SEXY...LOL!!!) 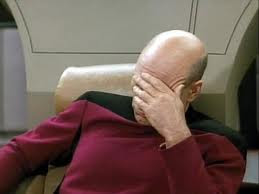 and purchase a few boxes to quench it's thurst for blo...eh I mean pack ripping. Obviously it's thrusting to take a shot at something like "The Cup" or "National Treasures" (Screw you Nick Cage) or perhaps maybe even a small case of something. I've also contemplated picking up one of the following rookie cards for my kids:

For some reason I keep leaning to Cal Ripken or Henry Aaron. My son wants to shoot for more Even Meek stuff while my daughter wants more David Wright stuff.

I'm already getting a few tickets for the kids to go to some Pirates ball games and for some Altoona Curve ball games so we can add some new auto's to the children's growing autograph collection. Perhaps I could get them started on collecting autographed bats and balls again. Who knows what we'll do just yet?

So.....what do you think I should bust a box of in Baseball, Football, Hockey?

NyQuil is my friend at the moment 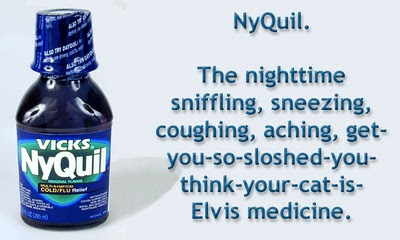 We all hate to see our son(s) and/or daughter(s) get sick and they always seem to give ya the biggest hugs and kisses when their sick. Well, I guess I could say so much for me avoiding the bug that has plagued my daughter since thursday evening. Now I too also find myself nursing an URI/cold and not really resting as well as I should be. I decided then it was time to visit with an old friend, "Mr. NyQuil". I took my prescribed dose (perhaps an extra tsp more+-) at 11am and i did not wake up til 10:38pm. I never heard the phone ring. I never heard the dogs crying to go out and pee. I never even got up for halfway through my mid sleep bathroom break. I was out cold! I know they rest is the best medicine but I felt like I could've gone right back into bed when I did get up. Unfortunately work calls and I must go! Hope you guys stay warm and healthy!
Posted by The Big Kahuna at 1/26/2011 01:20:00 AM No comments:

Mr. Roethlisberger meet Mr. Mendenhall and watch as he loves you!

Mark Brunell never had a chance to defend himself!

I was rather surprised to find in my mailbox today a subscription to Beckett Monthly magazine. I called the customer service department and asked how I could have a year long subscription when I did not order it at all. Now the Beckett customer service girl was very nice and pleasant to work with and had told me that it was paid via check on Dec. 13th as a gift. Now I had already checked my credit card statements and found that none of my cards were charged so I'm kind of left speechless at the moment as to how this has happened. I said to her are you sure it was applied to the right account because I have not ordered this magazine since 2006 and I did not send anything in at all. She said that it was a gift and that I would receive Beckett Monthly for a year. She took my phone number and she said she would look into it and if there was any kind of a mistake she would give me a call.
I can't figure out for the life of me who would send me a gift subscription like that because no one in my family did that nor do they even know that I read that magazine from time to time. And I know my fiance didn't do it because she has no idea of what the hobby even really means. So I'm left to assume someone from the blogging world must have been feeling very generous. So to Whomever did this fine deed I thank you for it and I am surprised and shocked by your generosity! Thank you, Thank You very much!
Posted by The Big Kahuna at 1/21/2011 06:02:00 PM 2 comments:

Anybody gonna have Adcock on your team? 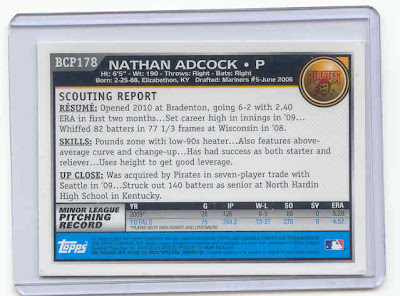 Yeah.......I could see this guy being at the front of the line with the ladies with a name like that! 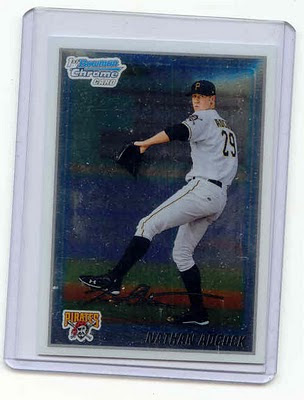 Mark Sanchez...Jets fan or not....he is a man of respect and he has a human heart like you and me!

I came across a good story today on ESPN. Whether you're a NY Jets fan or not, you have to admit that Mark Sanchez has a heart and lacks an ego and lets us into a bit of his private life. I wish there was more athletes like Mark Sanchez! My thoughts and prayers go out to the Binkley family at the loss of their 11 yr old son Aidan. The Jets organization and Mark Sanchez made a child's dream last an eternity. Rest now in peace Aidan....for you are home in the Arms of the Angels.

Things I use and abuse